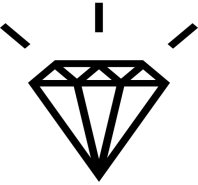 A song can be thought of as a diamond because it lasts forever, can create an emotional experience and can be a powerful symbol. Yet a song is rarer than a diamond because very few people or organizations possess one. A song isn’t a physical gift, so it can be shared freely. It can unite many people at once by focusing and inspiring them.

If you want something unique for yourself or want to give something that few possess, then consider commissioning an original song written and produced by Dyniss with the exact message and style you desire.

At weddings or in advertisements or in meetings — songs enchant listeners. You can give joy or share any unique message by commissioning a Custom Song for your event or organization.

Dyniss has been writing and producing songs for many years (see his personal music page and check out his huge credits list). His productions are world-class. He wants to give you an outstanding product. Find more about The Man of Song in his bio.

If Dyniss writes and produces a song for you or your event, he’ll get you involved from the beginning. Who will the listeners of the song be? What style of music would you like them to hear? Such questions will subsequently get your song launched. If you already have lyrics or a melody in mind, you’ll have help bringing them to fruition and you can even be part of the studio recording process.

If you need your song presented at an event, Dyniss can deliver it in person with professionalism and charm to your recipient(s) with a guitar or with backing tracks — it’s your choice. If you want an audience involved, there’s a live texting option that allows anybody with a mobile phone to text something regarding the song to a video screen that gets integrated into the song live. When was the last time you gave your audience an unforgettable live experience?

Finally, if you want an established music recording star to sing your song instead of Dyniss, it’s possible. Options can be discussed.

For the studio recording of your Custom Song, choose to have one of three types: an Unplugged Song, a Deluxe Production Song or an affordable Instrumental Song.

The Unplugged Song is a straightforward and cost effective type of Custom Song. Written and produced professionally, an Unplugged Song is usually arranged with guitar and voice. It’s great for events like weddings because it doesn’t require intense arrangements like radio or commercial promotions require. It’s a foundation of high musical communication and conveys whatever you desire through the magic of lyrics and sound. Check out hit YouTube examples like “Thinking Out Loud” by Ed Sheeran, “More Than Words” by Extreme, “Needle and the Damage Done” by Neil Young, “In Your Atmosphere” by John Mayer, “Times Like These” by Foo Fighters, “Layla” by Eric Clapton, “Black Hole Sun” by Chris Cornell. Dyniss delivers Unplugged Songs in such styles and more.

Love songs are the most common types of songs. Like a diamond, a love song makes an incredible gift. At a wedding, the vows could be transformed into lyrics. The below Unplugged Custom Song was written and produced by Dyniss as a gift from a man to a woman. The recipient’s favourite insect was a dragonfly, while playful elements of the couple’s relationship were integrated into the lyrics:

Dyniss wrote and produced the below Unplugged Song for a business wanting a song about happiness to associate with one of their training programs:

The Deluxe Production Song is a musically rich and complex kind of Custom Song. It’s what you expect to hear on the radio with a full band or with modern electronic sounds. Written and produced professionally, a Deluxe Production Song is arranged with numerous instruments like drums, bass, guitar, keyboard, strings, backup vocals and more. It’s the sort of experience that can tickle all of your sonic senses. Check out hit YouTube examples like “Waiting on the World to Change” by John Mayer, “I’m Yours” by Jason Mraz, “You’re Beautiful” by James Blunt, “Hey Jude” by The Beatles, “Are You Gonna Go My Way” by Lenny Kravitz, “Moves Like Jagger” by Maroon 5. Dyniss delivers Deluxe Production Songs in such styles and more.

Dyniss wrote and produced the below Deluxe Production Song for the Green Party of Canada, used in their federal election campaign:

Dyniss wrote and produced the below Deluxe Production Song for ILEA (International Live Events Association) for their Annual General Meeting, promotion and re-branding:

Dyniss used one of his existing songs and produced an upbeat electronic version of the below Deluxe Production Song for Goodlife Fitness and their yearly national meeting:

Dyniss wrote and produced the below Deluxe Production Song for a writer to promote their upcoming book and screenplay:

The Instrumental Song is the most affordable type of Custom Song because lyrics and vocals (the most challenging components of a song) are eliminated. Written and produced professionally, the Instrumental Custom Song is arranged with either a few instruments or with many instruments, based on your desires or requirements. It can convey any mood you want through the magic of sound. Use one for your business or organization. Feel comfortable that only you will have this unique music associated with your brand. Re-enforce brand loyalty by including it in every possible situation, from team meetings to online multimedia for the public.

Dyniss wrote and produced the below Instrumental Song to replace the original Hockey Night in Canada theme song. The character of the music was intended to sound similar to the original 1968 music production. A real horns section was hired to add authenticity:

Dyniss has been producing music for other people and organizations since 1994. See some testimonials and credits here.

Visit the Shop to read more about the three types of Custom Song and look at prices.