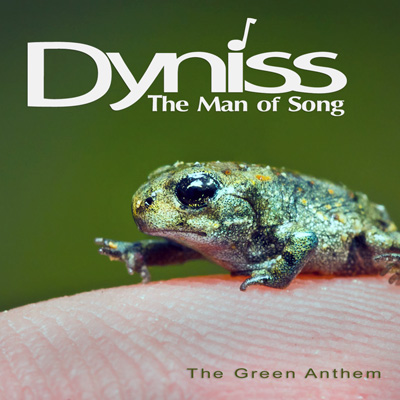 All songs on this album were written, performed, programmed, engineered, produced, and mastered by Dyniss. Mastered at The Lacquer Channel, with thanks to Noah Mintz for setup.
Live drums were recorded at OM Studios, with thanks to Stefan Podgrabinski for allowing the band to rehearse there. Most recording took place in Dyniss’ bedroom in Hamilton or basement in Toronto.
Some of the first band members’ arrangement ideas made their way into the eventual songs: Mark Boucher (keyboards, percussion, vocal harmonies), Chester Monoharan (bass), Morris Coccia (drums), and Alex Tikhnenko (bass).
All instruments for the recording were either played or programmed by Dyniss, except:
Some keyboards on various songs by Mark Boucher. Backup vocals on “Watersnakes” and “Any Day” by Raphael Keelan. Female voice on “Seekers” by Diane Burgin. Flute on “The Green Anthem” by Laura Nashman.

If you’re from an organization or planning an event, you can purchase copies of this album for your attendees at a discount (ask Dyniss for the discount rate).