I had two full (and successful) test shows a week ago. But when I reached out to a booking agent I had never met, I realized from his response (and at least temporary rejection) that he didn’t fully comprehend what I was providing. Therefore, I decided that I must provide a clear video demo to book new shows. After editing a demo at home, I shared it with a few friends/family, asking for feedback. Wow — there was a lot of constructive feedback. I got pretty upset at first — not because of criticisms — but because I realized that I had to do it all over again. Time feels so short and I’m missing some of my primary goals with these detours. I don’t even know if the demo will capture anything for me.
Correction — after typing that, I know it HAS TO capture stuff for me! This ain’t no boring, “Listen to my mp3” way of doing things. Onward! 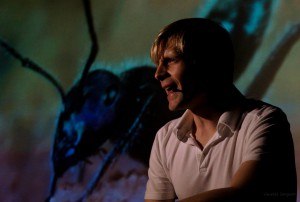